Patek Philippe, Her Majesty the Queen of Geneva’s auctions

Five out of five auctions, all auction houses combined, each in turn earned a record bid for a Patek Philippe watch from 200 000 to 6.2 million Swiss francs for the Only Watch auction.

This charity auction was the great success of this last watch week in Geneva, and beyond the price achieved by the Patek Philippe, this result illustrates in every way the market and the brand’s supremacy, knowing that Rolex was not present, with more than 60% of the total product which sold for more than 10 million Swiss Francs.

If we look at the results of this auction Only Watch, there has been significant results for the Independents, like FP Journe who crosses the mark of one million Swiss francs, lot 32, a market trend observed since the record sales of English watchmaker George Daniels, the forerunner of this Independence trend, last September at Sotheby’s in London.

In this series of results that are today’s trend of the market, we also observed the very good score of the Royal Oak Audemars Piguet Only Watch, lot 47, sold more than 800 000 Swiss francs this weekend.

This trend was confirmed throughout the weekend with the remarkable results of the modern Audemars Piguet Royal Oak complications sold the next day at Sotheby’s.

So many signs that testify to the good health of the market as well as the predominance of the concept of “star brands” and “stars among the brands”, adding the independents who are the very definition of “artists of time”.

Nevertheless, beyond this crazy afternoon under the hammer of a brilliant and energetic auctioneer at Christie’s, a man will have marked all minds by his initiative Only Watch, it is of course Luc Pettavino who shone by the success and the communicative enthusiasm of his charity work.

By far, he will remain the personality of this auction season in Geneva, having managed to engage the entire watch industry in this project, which is to prove that charity goes well beyond all record prices, it is the heart who speaks above all things and the results are there.

In conclusion, a series of auctions with a series of highlights which illustrate well the size of the market as well as the ranking between various auction houses, the leading duo Phillips and Christies, followed by Antiquorum who took over this year the leadership on Sotheby’s. The auction is still going strong, but the market for Genevan actors is changing towards more and more digital synergies.

How to explain this choice of programming together the two Sotheby’s and Antiquorum auctions the same day, which seems an heresy in a digital world where you can now see everything or buy everything just a click away? It is important to see that the two competing leadership strategies by Phillips and Christie’s are paying off with far fewer watches.

If we look at the two cumulative catalogs Antiquorum and Sotheby’s there were in all almost 1000 watches, while Christie’s and Phillips only showed half with less than 500 for a global product almost three times higher at the end. Only one thing remains: collectors are more and more demanding about quality and the quantity is no longer recipe.

As for the best bidding, this time the gold prize goes to the Patek Philippe Only Watch auctioned 6.2 million Swiss Francs, followed by Phillips for a Reference 2499 rose gold sold 2.7 million. Then the significant prices went on the “Senza Luna” at Christie’s sold 972 500 Swiss Francs and finally a rose gold chronograph at Antiquorum sold 305 000 Swiss Francs, as well as a pocket watch with enamel sold 200 000 Swiss Francs at Sotheby’s.

All these figures also show the difference and contrast of the different competitors’ strategies, with clearly an advantage for the Only Watch sale and its record of the week for a unique Patek Philippe watch.

A big thanks to Luc Pettavino and the entire Christie’s team for this magnificent success during this 2017 session. Most major brands have responded and their representatives were in the room to honor the cause defended for research on muscular dystrophy of Duchenne. A new battle won over against the disease, thanks to the will of everyone in the watch industry.

This Only Watch sale has given the tempo of the watch auction weekend, but also revealed the magnitude of the live auction phenomenon which is increasingly moving towards the identical show business of the music industry, where the music is consumed via digital means while keeping its human warmth during live concerts events.

It is also interesting to note that the 2017 Only Watch edition also offered a human experience with each watch. Witness the lunch and the visit of the Patek Philippe factory with Thierry Stern, a unique opportunity to discover the history of Patek Philippe. No doubt a new way of seeing traditional Swiss watchmaking through the human experience.

Particularly spectacular, the Only Watch auction under the hammer of the brilliant auctioneer, Raoul Kadakian, will have given the start of a weekend of crazy prices from the simplest to the most complicated. The electric atmosphere has even allowed Prince Albert II of Monaco to close the sale with “white glove”, the ultimate honor reserved for 100% sold during the auction.

In total more than 10 million Swiss Francs were raised thanks to the passion and generosity of amateurs and collectors of all kinds. As this auction ended in Geneva at the Hotel des Bergues, everyone then headed for the traditional evening sale at Phillips with Aurel Bacs back from New York with his latest record “PNPND” as titled in the Hodinkee blog by Jack Forster.

Once again Aurel Bacs illustrated himself with the hammer, in a somewhat dissipated room, which he drove perfectly well with his natural authority. In the end, the Heuer Parade made also a “white glove” with sustained prices but without a new world record, held by the famous gold Heuer chronograph offered by Jack Heuer to the racing driver Ronnie Peterson, sold by Sotheby’s.

But beyond the simple results and figures, we must analyze the approach of the auction house and the story telling of the brand that strengthen its heritage in the spirit of a new generation of collectors raised to the rhythm of posts on social networks as well as in depth articles by Hodinkee.

This phenomenon, which affects all generations of collectors, is a background that has clearly brought out a new approach to the vintage watch collection, far from the classics of Patek Philippe and Rolex. It is interesting to note that each brand has its chances at auction, you just need give to yourself the means to highlight your cultural heritage.

At this game, Jean-Claude Biver, has mastered the art of magnifying a brand that has one of the richest stories in terms of motorsport, especially thanks to the Ferrari drivers who have worn the Heuer watches, from Clay Ragazzoni to Niki Lauda, ​​legends of motor sport racing. One of my pride is to have sold the Heuer Monaco of Clay Ragazzoni many years ago at Sotheby’s it would be great if it could resurface once again.

As it has been repeated many times Aurel Bacs, the advertising slogan of the brand “don’t crack under pressure”, strong bids have multiplied during these two evening sales to culminate at more than 1 428 500 Swiss francs for an Omega tourbillon, the new world record for the brand. Here is another example that shows that brands have an invaluable historical heritage.

During this last week end, we will also remember strong results for Rolex sports watches, but this does not seem to me the major lesson, to my opinion it is the result for a Breitling at Antiquorum, estimated 5000 CHF and sold in the final 26’500 CHF. A real episode that says a lot about the potential of this forgotten brand at auction, or at least under watch collecting radars. Breitling will most probably be the next vintage hit at auction !

We can trust his new CEO, Georges Kern, to finally seize this tremendous opportunity on the vintage market. Once again, the Antiquorum team was able to take advantage, as usual, of a new and fresh market trend, while having the opposite strategy advocated by competitors Christie’s and Phillips.

No doubt the “french flair” of the new CEO Romain Réa at work since the beginning of the year allows him again to be ahead of Sotheby’s who closes the race on the auction podium. Phillips topped the list with more than 23.5 million, followed by Christie’s 12.5 million, Antiquorum 8 million and finally Sotheby’s 5.5 million, a better result than last May auction.

But what is happening at Sotheby’s? the oldest auction house since 1744, which broke the all-round world record in 2014 with the famous Patek Philippe Graves sold 24 million Swiss francs in the room of Hotel Beau Rivage from Geneva. A temporary breakdown that foreshadows a renewal in 2018 …

Obviously, this weekend was the opportunity to discover a huge potential outside the traditional auction rooms, no doubt you have guessed the online sales that flourish at the moment with Anglo-Saxon giants Christie’s and Sotheby’s. This is the battle of tomorrow for traditional auctions that will need to deal with digital that is increasingly present.

In a very extraordinary weekend on this final 2017 session, a breaking news has caught my attention well beyond prices and records: the announcement by Hodinkee of the launch of a venture to sell new watches online, an example to meditate for prestigious auction houses which will need to rethink their business model.

If spectacular auctions like Phillips fill up with a diligent audience for the past three years, would not it be wise to focus on the best watches at live auction and sell the rest online? In this area, Christie’s seems to have found the right balance between live and online auctions.

Finally, beyond the records, the strategy of each other, one thing remains unchanged: the passion for watches, happy faces of all those like me who have been walking for years behind the scenes or still occupy the front scene, one and the same phrase on the lips of everyone is “it is magical”, we must never break auction magic and its human comedy.

That’s why the highlight of this weekend was in my opinion the Only Watch auction, a wonderful testimony of the human soul at its best, for the good cause and the pleasure of being together. The repercussions of this auction went well beyond the records, since the profits go for the fight against the disease.

Hats off to Luc Pettavino, Prince Albert II of Monaco, Christie’s and all the participants in this auction, buyers and sellers, you honor the values ​​of Haute Horlogerie with Patek Philippe as the leading brand. Thank you all for this wonderful last auction weekend in Geneva 2017. 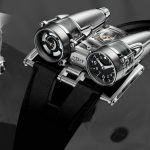