Christie’s auction house sold an exceptional collection between May 8 and 10, and May 1 to 11 on the Internet. Here is a very special auction, since the works of art of one of the greatest collectors sold and the entire proceeds of the sale redistributed to charity. A resolutely altruistic approach, for one of the wealthiest men of his time with a resolutely philanthropic approach.

Since it is David Rockefeller, we are talking about an important figure in the art world. Disappeared on March 20, 2017 at the age of 101, this business man former Chairman of Chase Manhattan Bank was indeed one of the greatest fortunes in the world, but also an avid and passionate art collector. Following his wishes before he passed away last year, all proceeds from the sale will benefit charities selected by himself and his wife Peggy during their lifetime. All the works of art auctioned made more than 850 million dollars which makes it the sale of the century; among them, a very beautiful Patek Philippe retailed and signed on the dial by Tiffany & Co.

In line with the record breaking sales of Yves Saint Laurent by Pierre Bergé, the Rockefeller auction brings together all superlatives; but if we consider it the sale of the century, it is not so much for the indisputable quality of the works that were dispersed, nor for the astronomical amounts that it achieved under the hammer of the Christies house, but above all thanks to the David Rockefeller’s last wishes: redistribute his fortune through charity. For this philanthropic man had such a unique conception of the concept of possession as that of the collection of works of art. David Rockefeller did not feel that he owned these works, but simply their caretaker before passing them on to other generations who would watch over them.

A family attached to art

In his lifetime, the great generosity of David Rockefeller allowed him to turn this mythical family name into a symbol of altruism around the world. The grandson of John D. Rockefeller, who founded Standard Oil, David his wife Peggy McGrath, collected for a lifetime impressionist and modern art, most probably under the impulsion of David’s mother who co-founded MoMA in 1929. The highlights of the impressionist art he possessed included, among other wonders, three Picasso, five Monet, two Matisse, three Vuillard, two Gauguin, two Seurat and three Bonnard. The Rockefeller family has always had a special relationship with art; David’s father notably financed the arrival of cloisters “Cloisters” in New York. David Rockefeller was President Emeritus of the New York MoMA Museum of Modern Art and a major donor to museums and universities in the United States.

Philanthropy in the heart

After a donation of fourteen modern paintings in the 1990s, David Rockefeller also offered in 2005 to MoMA not less than 100 million dollars to allow the extension of the museum. In 2008, he donated $ 100 million to Harvard University. He was also a member of the Bill Gates and Warren Buffett project in 2010 that encouraged wealthy businessmen to donate at least 50% of their wealth to charity. He was an ardent advocate of “enlightened” capitalism, calling for greater corporate social responsibility, and urging wealthy people to pay their taxes. David Rockefeller and his wife Peggy created the David Rockefeller Fund in 1989 to implement their annual charitable donations. A fine example of generosity given to us by this enlightened man, who evoked the future sale of his works with these words: “All these objects that brought us so much pleasure will come out into the world and will be available again for other guards who we hope it will bring the same satisfaction and the same joy “.

An interesting Patek Philippe, which was offered to him in 1936 by her mother on the occasion of his twenty-first birthday, was auctioned at the Christies online auction. This gold pocket watch five minute repeater was made of a gold case with engraved coat of arms and dial signed by the retailer’s name Tiffany & co. Bearing as well a personal  inscription from his mother on the inside cuvette from the back cover. Lot 1131 estimated at USD 4,000 to 6,000 finally sold for USD 47,500. Part of the American dream … Christie’s said “honored to be given the responsibility for the Rockefeller sale, whose proceeds will be donated to charitable organizations, in keeping with Peggy and David Rockefeller’s commitment to devote most of their Heritage to philanthropy and support cultural, educational, medical and environmental causes long supported by the couple. “

Beyond the numbers, we wanted to testify once again to the personality of David and Peggy Rockefeller who will remain forever in the hall of fame of auctions. This sale, both live and online, is undoubtedly the perfect illustration of the world in which we live, resolutely turned towards new technologies but which keeps the essential, which is  the human through the generosity of this couple who chose to give the entire proceeds of the sale to the charities. David & Peggy Rockefeller will forever be the greatest philanthropists in the history of the art market. Thank you. 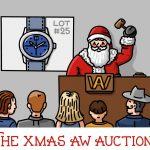 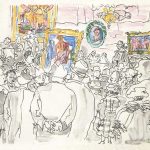