GLOBAL RESULTS FOR WATCH AUCTIONS IN 2016

It is all in 235 940 699 $ of sales realized among the three major capitals of the watch market with the cooperation of leading auctioneers Phillips, Christie’s, Sotheby’s and Antiquorum in order of best ranking for 2016.

Outside these main world capitals, we should also mention the contribution of some local markets such as Paris & Monaco where the French leading auction house Artcurial takes the leadership with 5 million $, Christie’s Dubai 6,5 million $ and finally Sotheby’s London for 6,6 million $, representing in total 18,1 million $.

Phillips achieved the best results in 2016 on the two main markets Geneva and Hong Kong with a global turnover of 104 007 466 $. Thanks to their thematic sales and while achieving the new world record for a wristwatch last November 2016, a Patek Philippe stainless steel chronograph with perpetual calendar for more than 11 million $, along with the best harvest of action results both in Hong Kong and Geneva, Phillips in association with Bacs & Russo is now the key player among collectors.

If we add up all figures from Christie’s watch auctions worldwide, including Dubai results, the world’s leading auction house among all categories, it is behind Phillips with 82 246 713 $. Nonetheless it remains the challenger of Phillips in the main watch auction hubs of Hong Kong and Geneva. In 2016, Christie’s achieved the most important result for a pocket watch, an antique complicated timepiece by Breguet No. 217 sold for 3 333 268 $ during the May session in Geneva.

ANTIQUORUM AND SOTHEBY’S : THE OUTSIDERS

Both auctioneers are below the symbolic threshold of 50 million $ for their global results in the three major watch auction capitals, which places them clearly as outsiders on the market to face competition with the main leaders. If Antiquorum and Sotheby’s are close in terms of figures over the last season, it is necessary to note that Sotheby’s raised itself last year as the leading watch player in New York ahead of Christie’s, giving the US market a strong dynamic.

While looking at numbers in this battle for watch auctions supremacy in each capital, it is Geneva which confirms its worldwide leading status with 113 842 684 $ followed closely by Hong Kong with 95 011 091 $, which is more than honorable knowing the difficulties of the local market with Swiss watch exports last year.

It is clear now that cards have been redistributed in Hong Kong with the strong downturn of Sotheby’s in terms of annual global results for their watch department locally, where it was two years ago the strongest location worldwide, now it seems like Christie’s is ahead of its rival, finally Phillips proved its worldwide strategy with great success to grant itself the first position following its first season in Hong Kong.

If Phillips clearly leads the watch market, the global network of Christie’s will be their strongest asset this year and their team of specialists worldwide will be on the lookout of tactical errors from their main competitor. Match point in perspective!

The Big Apple does not benefit from dynamics of Phillips since the auction house does not operate locally which gives plenty of space to the duopoly of the big two Sotheby’s and Christie’s, in the order of arrival. The position of New York on a global scale of watch auctions is peculiar due to the fact that it’s mainly a “sedentary” market versus “occasional” markets like Hong Kong as well as Geneva.

If we look closely at the art market in general, there are three big hubs for “sedentary” markets organized locally over several decades such as Paris, London and New York, each having specific characteristics, like Art Deco sales for Paris, contemporary and modern art for New York.

On the contrary, “occasional” markets where the auction format is scheduled twice a year relying on specific areas of the art market, like watch auctions in Geneva and Hong Kong, have largely contributed to the success of watch auctions locally.

Printings of catalogs have largely been reduced over the last few years by each auction house, new ways of communicating digitally have emerged to facilitate the reading of catalogs online, this is an inevitable direction for all auctioneers. It is now more than likely that all digital tools will revolutionize the world of auction very soon, and not only the world of watches, which obliges us to stand back with regards to last year’s global results for live auctions.

Dynamics which we observe on “occasional” markets confirm a real trend towards live bidding as an event or a show in which all collectors like to gather and participate in the traditional way.

With the highest average price in 2016 at 121 480 $, Phillips reinforces its niche strategy towards exclusive and rare timepieces, also achieving best auction results for both star brands Patek Philippe and Rolex. From its part, Christie’s with 54 460 $ played its best card and opted as well for a new concept while celebrating the 40th anniversary of Patek Philippe Nautilus in each capital including Dubai.

It should be noted that Sotheby’s unlike previous years strongly diminished its average price down to 25 985 $, half of Christie’s which shows a sign of weakness towards the market in 2016.

Antiquorum and Sotheby’s globally did not take benefits of record results for watches at auction, unlike Sotheby’s in New York where the average price is 40 507 $, in perfect line with its annual results locally, ahead of all its competitors.

GENEVA THE WORLD CAPITAL FOR WATCHES

Geneva remains over the years top-ranking with 67 130 $ average price by watch sold at auction ahead of Hong Kong 39 243 $. If Phillips auctions are at the heart of the attraction for most collectors, the fact remains that their strategy of “auction show” is one of the reasons of their success.

If results globally follow the trend of the art market, one notices that there is downturn like in all areas of the auction business, it will be interesting to follow carefully all results this year and evolutions as well, without a doubt Christie’s will be a fierce competitor to Phillips.

Antiquorum and Sotheby’s do not seem to worry market leaders at this point, but auctions are full of surprises and we are going to follow the evolution of these two players close to each other, so much by their business volume as well as the average price by watches sold at auction.

THE FUTURE OF LIVE AUCTIONS

If the business model of live auctions needs to evolve over the next years to come, I think more and more we will go towards an “auction show” in which the average price will be high. The concept of thematic sales or still that of evening sales are a way to show differences between players, but naturally it is easier to say rather than to make. Speaking of my personal experience, everyone looks for the perfect gem at the right price.

This quote summarizes well the pleasure of quest to my point of view :

« Success is not final, failure is not fatal : it is the courage to continue that counts. » Sir Winston Churchill.

This year anyhow will bring as well many surprises in all capitals of the watch market but it could also come from elsewhere like Paris, London, Monaco or Dubai, and we will follow for you all watch auctions with its treasures on all continents. Our next article will fall on Valentine’s Day February 14th, the only way for us to find you hidden treasures and make your heart beat while reading the Expert’s Eye ! 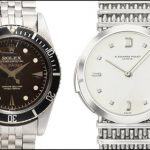 THE AUCTIONS HALL OF FAME IN GENEVAThe market's eye 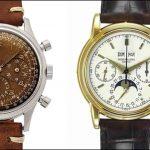