« Time is feminine » : A new chapter for watch auctions

If the SIHH just opened its doors in Geneva with novelties of all kinds, a breath of fresh air blows into the world of vintage watches through the selection of watches presented by the auction house Artcurial at the Yacht Club de Monaco on January 18, for this first watch sale of the year, under the evocative title “Le Temps est Féminin”.

The innovative concept of Artcurial is to highlight the feminine world in watchmaking starting from the beginning of the last century, mainly with wristwatches and some iconic models such as the “Cadenas” by Van Cleef & Arpels or the Bulgari “Serpenti”, two major iconic models worn by illustrious figures throughout the last century, from the Duchess of Windsor to the legendary Hollywood actress Liz Taylor.

Too often neglected in recent years, the feminine world in watchmaking has nevertheless played a crucial role in the advent of wristwatches in the early part of the XXth century. If men today passionately collect vintage wristwatches, they can indeed thank the elegant of the late XIXth century who launched a new fashion to wear the watch on a wrist rather than having to wear it as a pendant, like the little Cartier enamel watch at the beginning of this sale.

This thematic sale is therefore to be closely watched by the brands present again at SIIH, since they are largely represented in this selection that revolves mainly around vintage pieces at Audemars Piguet, Cartier, Jaeger-LeCoultre, Piaget, Vacheron Constantin, Van Cleef & Arpels. Let us also salute the contribution of each of them in the research which are always valuable assets for collectors to better understand the criteria of quality, rarity and provenance

This list of brands in all genres includes a name that perfectly illustrates the “vintage” potential of women’s values in the Haute Horlogerie universe: Piaget the famous watchmaker and jeweller, whose creations in this field are increasingly sought after by collectors.

At the conference organized jointly by Piaget and Artcurial at the end of last year at the auction house’s headquarters, Piaget’s Brand Equity & Patrimony Director, Béatrice Vuille-Willemetz, summed up in a few words the spirit of the project initiated by Marie Sana, Head of the watch department at Artcurial.

“I look forward to this project. This is a way of emphasizing the importance of women’s watchmaking. It is in the feminine sphere that our profession has developed in terms of the aesthetics of watches, the most creativity. In our House, the feminine watch has always been important. Women play an important role.”

Reading the catalogue, which includes nearly a hundred watches, it is interesting to note that the Piaget brand will undoubtedly be the most emblematic, far ahead of Patek Philippe and Rolex, who are usually always stand on the highest steps of the podium.

A teaching to be meditated on for the watchmaking industry, which always benefits from the prestige of auctions to best promote the Brand Equity & Patrimony. Nonetheless, a magnificent Patek Philippe pendant watch is still one of the highlights of this sale, even if number and value wise it is much lower than all other regular watch auctions  focusing usually on the male universe.

The place of vintage in women’s watchmaking

Piaget is both a watchmaker and jeweller, so it is interesting to look at the values of this brand, that is increasingly establishing itself as a fully-fledged “vintage” brand with its own universe from which collectors can draw a whole series of iconic models such as the famous “bangle watch” or the “Jacky”, pieces that are well highlighted in Artcurial’s catalogue.

Among this selection of Piaget watches, which unites several styles and periods, there are watches that are true works of art, such as this “bangle watch” produced around 1969 in 18k yellow gold decorated with plates of nephrite and lapis lazuli, lot 196, a perfect combination between watchmaking and jewellery that illustrates so well the work of this house which highlighted the feminine aspect of watchmaking in a world of luxury watches. Watches well illustrated and very widely documented in this section, lots 189 to 196, give to this catalogue a real insight into the creation of watchmaking and jewellery making in a feminine world.

Although the 60’s and 70’s were a period of transition for Swiss watchmaking industry, this period remains one of the most artistically fruitful for the world of women’s watchmaking at Piaget, judging by this selection of rare pieces in this catalogue. Unusual shapes, breaking the traditional codes of the usual round or square case shapes, have given rise to true works of art on women’s wrist.

Taking as a source of inspiration the Haute Couture fashion shows in Paris, under the impulse of Yves Piaget, Piaget’s designers took a direction to best magnify ladie’s wristwatches giving them all letters of nobility. In the catalogue, the numerous quotes taken from the reference book Piaget Watchmakers et Jewellers since 1874 give us a beautiful approach to the richness of watchmaking creations in the feminine world.

A quote from Yves Piaget perfectly illustrates the feminine universe in the Haute Horlogerie, mixing watchmaking know-how with art craftsmanship, the essential component that drives each new collector into the auction world.

“I wanted to present our watches and jewellery as works of art and those who shape them as true artists.”

Through the pieces chosen by Artcurial, we find this style that characterizes women wearing on her wrist a true “work of art”. But if Piaget was at the forefront of aesthetic research in his approach to decoration with precious or semi-precious stones, it would be interesting to fully understand the potential of vintage in the world of ladies’ watches.

This thematic sale is very interesting because it opens many perspectives for brands beyond the hegemonic situation of Patek Philippe and Rolex, who alone account for nearly three-quarters of the market in the men’s universe. This thematic opens the debate on the brand’s potential and its heritage in women’s vintage pieces to bring added value to the brand and benefit from the positive effect of good auction results.

If we look at the statistics that we made during the last six months with our new tool, The Auction Report, we can see that only the watchmaker George Daniels managed to take first place in an auction. There is therefore little room left to benefit from the media impact of good auction results at auction for vintage watch brands.

Let us remember, when wristwatch auctions began in the early 80’s the prices were the same for everyone, only complications mattered to differentiate them, the rest of history you know it by heart with Patek Philippe and Rolex which are today the two major star brands.

While the masculine world leaves little room for visibility for some watch brands, it should be noted that behind the rain of records for Patek Philippe and Rolex, only the Cartier brand managed to shine in the women’s universe with Jacky Kennedy’s famous “Tank” wristwatch, bought by the no less famous Kim Kardashian, which means that ladies’ watches can also be a good return on media presence.

So this small revolution in the auction world, which for the first time grants women a place in an essentially “macho” universe, has the merit of being pointed out as the beginning of a new story for ladies’ watches at auction. While ladies’ watches have too often been left out in the “jewellery” category at auction, things are now clear with Artcurial, which places them in the “watches” category where they should belong.

As a miracle never happens alone, the last lot of this auction perfectly illustrates what we are saying in our article with this poetic complication « le pont des amoureux » by Van Cleef & Arpels, a true work of art from contemporary watchmaking Swiss industry that sums up the desire of women to wear watches with complications as well, while adding to it the art of craftsmanship and making the singularity of measuring time now so feminine. 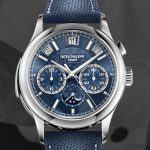 From the Rolex “Paul Newman” to the charity auction Only Watch : Watchmaking records at the service of a just cause !The expert’s eye